Last week, sandwiched between International Women’s Day and Mother’s Day, Sarah Everard went missing and was found dead, with a serving Metropolitan police officer having been arrested and charged with her kidnap and murder. This prompted waves of vigils being organised across the country, a High Court ruling outlawing them under the current coronavirus restrictions, and a lot of people going to them regardless.

Not the best week for women. That said, when I visited the vigil site at Valley Gardens in Brighton on Sunday, I saw dozens of names and dates written on pieces of paper and held down by pebbles. I overheard one person say ‘where are their stories? Where was their coverage?’

In March 2017, the Crime Survey for England and Wales (CSEW) estimated:

In January 2013, An Overview of Sexual Offending in England and Wales, the first ever joint official statistics bulletin on sexual violence released by the Ministry of Justice, Office for National Statistics and Home Office, revealed:

I spoke to women from Brighton about how they’ve felt across the last week and how safe they feel in the city—like Emma Cockburn, 45, who works as a frontline worker.

I am conflicted about the vigil. I am a frontline worker and so feel strongly about Covid. However I feel strongly about safety of women. I don’t feel overly safe in Brighton. I think the lighting in Brighton could be better. I don’t really walk anywhere in the dark as I don’t feel overly safe. I have lived in many cities and none I have felt safe in. I have been followed and jumped a wall. I have held my keys in my hand I have worked out ways of fighting.

Every woman I spoke to about their own feelings of safety said they had experienced some form of harassment in the city; many said they’d had to learn ways of defending themselves against attackers, and that the last week had made memories of sexual assaults resurface. 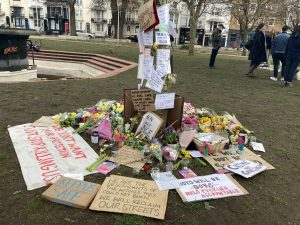 Louise Johnson, 31, said she was ‘really disappointed’ that the vigil was cancelled, and ‘disappointed if not surprised’ that the police didn’t work with organisers to help them work out a way to safely hold a vigil.

Especially as this case concerns one of their own, they should have wanted to express their solidarity with us, and shared in our feelings, and started on a road to earning our trust in them protecting us – so many women don’t feel that they will protect us.

Myself and my partner went to walk around the Level anyway, and ended up at the vigil just after the police stepped in to stop the woman from speaking. I guess you have seen the videos of this by now, but just in case – the vigil was socially distanced until a group of officers walked in to stop a woman speaking, just as she was talking about how Sussex police had failed to help a woman before she was murdered by an ex. They kettled everyone together so that they were no longer safely distanced, and after a little while things got aggressive and arrests were made. There were around 30 officers there.

I’ve experienced harassment and assaults more times than I can count, many in Brighton. At parties, inside venues and walking home at night. On more than one occasion I have been walking down a quiet street and a car has slowed down next to me, with one or two men’s faces staring at me through the windows, or calling out to me, or going round the block to come back and slow down again.

In these moments there’s this full-body terror where my mind is racing through what I can do. If there are other people on the street, my aim is to get close enough to them to dissuade the person in the car/following me from doing anything, but I never imagine that I will ask anyone for help. It all comes down to how viciously I might be able to fight back, and how quickly I will be able to run away, and my survival depends solely on me. It has certainly never occurred to me to call the police.

I’m sure part of the reason for that is that when you feel threatened you are suspicious and untrusting of everyone around you, but also I think its because the majority of the assaults and harassments I have experienced have been in front of many other people. Strangers, his friends, sometimes my friends, once even a boyfriend. Not once, ever, has someone stepped in to help me. When I’ve witnessed friends being assaulted I have reacted quickly and angrily, but whenever it’s happened to me I’ve completely frozen. I imagine that’s a lot to do with it, people see something happen and they’re not really sure if its what they think, because the woman isn’t fighting or screaming, so they don’t want to step in in case they’re in the wrong.

Louise also highlighted a WhatsApp group chat made by members of Facebook group Brighton Girl. The group has more than 250 members, and is strictly an SOS chat ‘for anyone that feels unsafe for any reason at all’. People reply to any messages sent in seconds, and are relieved when they’re sent accidentally or there’s no danger.

Chloe McCloskey, 28, is one of the women who says she does feel safe walking around in Brighton. She said:

I think things have changed in the last three years since I moved here. The increase in sexual harassment at the beach is absolutely disgusting. As part of the ‘Brighton Girl’ Facebook group I saw around 10 posts a day at the height of summer last year which reported some kind of harassment.

In general I would not feel safe walking home alone late at night, especially in places like Pavilion Gardens. I genuinely do not know what can be done to make women feel safer on the streets because it would require a revolution in the thinking of the whole world and we are sadly still not there yet.

One small change would be the attitude of the police to take reports seriously and follow up on them- perhaps have some presence of uniformed officers around the beach to dispel persistent harassers. I am almost certain we saw the same group of men repeat offend last year with no follow up.

Women have been marching to Take Back the Night since the seventies. People have told me that they feel no safer now in Brighton than they did in the seventies and eighties, that they’ve been doing these marches for years and nothing has really changed.

“If you’re feeling deflated or silenced – you are not alone. We are all feeling that anger and distress and are determined to channel it into ongoing action because we all deserve the right to feel safe. We will continue using this event to share forms of protest going forward, including things that you can do from home. As an immediate action, we suggest that you write to Sussex Police or make a complaint expressing your dissatisfaction at the decision they have made.

It is perfectly legal to take your daily walk down to Valley Gardens and lay placards/flowers/notes/lights in memory of Sarah Everard and all other women who have been victim to male violence.

This is not a defeat, we are unified in our determination to bring about positive, fundamental change for all women’s lives.”

The thing about Sarah Everard that really shook me was that she did so many of the things women are taught to do to keep safe: phoned her partner to let him know where she was; wore bright, distinctive clothing; kept on a well-lit, main road. She shouldn’t have had to—nobody should have to when they’re just trying to go home.

It made me think about my own safety, living in Brighton. I try not to be out too late and if I am, I get a bus that drops me off 200 yards from where I live, I get walked back or I get a taxi. I have my location shared with a few friends and my partner, all the time. I have emergency contacts set up on my phone, so all I need to do is press the power button five times and they’ll be notified with my location. I don’t listen to music so I can stay aware of my surroundings, I take well-lit paths, I text people when I’m home safe, and I walk with my hand in my pocket with my keys between my fingers.

Any one of us could so easily be Sarah Everard, and that’s what scares us. I keep seeing a statistic from UN Women UK that 97 per cent of women have been sexually harassed but I don’t know a single woman who hasn’t been.

To donate to the fundraiser to help cover costs of those fined at the vigils, click here.

If you need any help or support, visit The Survivors Trust who provide support to victims of rape and sexual assault. They have a free helpline: 08088 010818.