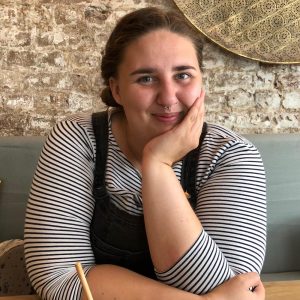 Hello! I’m Carly-May, a journalist based in Brighton, Sussex.

I am currently head of policy for Lloyd Russell-Moyle MP. I am an NQJ-qualified journalist, the NCTJ’s professional senior qualification, and I am the editor-in-chief of The Brighton Seagull.

In my previous role I worked to engage with people in specific communities to curate, collate and create content relevant to them. I focused on local charities through a ‘charity spotlight’ series and worked with schools and parents to increase coverage of school events and news. I was also the point of contact for online communities, through my increasingly successful reporter surgeries held every week in towns and villages across the area.

While studying for a Politics and International Relations degree at the University of Southampton I was involved in two student publications: The Edge and the Wessex Scene.

I was the Live Editor of The Edge from 2016-2018 and I was the Wessex Scene’s Opinion Editor from 2016-17 and their Head of Events from 2017-2018. In that time I worked closely alongside our Head of Publicity to send writers to hundreds of gigs and comedy shows. I edited work both for online and print using WordPress and InDesign, and marketed the publication from writer recruitment to magazine distribution and social media engagement. I wrote nearly 400 articles in three years, mostly covering interviews and gig and music reviews, but stepping in to cover TV, film and news whenever I was needed or felt I had a new idea to give. I was shortlisted for ‘Best Entertainment Piece’ at the Student Publication Association National Conference (SPANC) in 2018 for an article in criticism of the Netflix series ’13 Reasons Why’.

I also presented and produced my own radio show on Southampton University’s student radio station, Surge Radio, called Scones and Jams, an entertainment show which varied from guest slots, interviews, reviews and specialist music shows. I spent as much free time as possible in the studio thinking of new show and feature ideas and trying to hone and polish my radio presence, which was recognised in being highly commended for ‘Most Improved’ at the annual Surge Awards. I also won ‘Most Shows This Year’ at the radio station’s 2018 AGM, as I frequently took free show slots as well as helping with charity events, outside broadcasts, and Varsity coverage where I stood in to cover tchoukball at the last minute.

I gained experience in editing using Adobe Suite while at university and afterwards in my current work, and I’m well versed in Premiere Pro, InDesign, Audition and Lightroom.

At my final Media Ball, a celebration of media work over the last year, in 2018 I was nominated for ‘Best Interview’ and ‘Best Print Feature’ alongside dozens of others. I was also nominated for, and subsequently won, ‘Best Behind-The-Scenes’, an award given to “someone who has worked tirelessly to make their department the best that it can be for other volunteers, and for the wider audience.” I was invited to judge that award in 2019 as a result.

Post-graduation I studied at Brighton Journalist Works to gain an NCTJ Diploma in Journalism. I worked at local publications The Argus and BN1 Magazine, and on The Independent’s news desk, both researching and having pieces published. Other work experience includes NME, where I spent two different weeks pitching, researching, and had articles in print in their September 2017 issue.

Please feel free to drop me a line with any questions, thoughts, collaboration suggestions, rate requests, or pictures of your cat. I’d love to hear from you!